Sol Heartman is a Sydney based singer/ songwriter and acoustic guitarist. He has been playing guitar and writing songs for over twenty years.

Read more
His songs, written in an accessible contemporary folk/ pop style, are a reflection of his own continuing journey of healing and spiritual awakening. Much of the spiritual themes in Sol’s songs are inspired by A Course in Miracles as well as spiritual teachers/ authors David Hawkins and Michael Roads. Between his day jobs (working with people with disabilities and massage therapist) he enjoys spending his time with his beautiful wife and five children. For a sample of Sol’s music go to myspace.com/solheartman 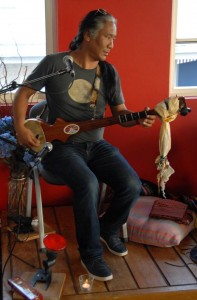 He was born to a nomadic family in southwest Tibet, escaped into Nepal from the Chinese occupation and was raised in the Tibetan refugee community in Dharamsala, India. It was there, where His Holiness the Dalai Lama actively encourages his people to preserve their culture through language, religion and arts, Tenzin first began to explore his musical talents.

Over the last two decades, collaboration with numerous Australian and International performers has allowed Tenzin room to experiment with rhythm, structure and to challenge traditional Tibetan musical norms.  His award winning songs have found a place in the complex tapestry of global sounds.

Tenzin feels a particular connection to the music of the wandering people of his homeland. He recalls his father’s mastery of the lingbu (transverse bamboo flute) and his mother’s beautiful singing voice and attributes much of his passion to those early influences. His music has been described as “beautifully evocative,” “healing,” “mesmerizing,” “spine-tingling,” and “transcendent.”

Tenzin’s cantering rhythms, soaring vocals and exquisite flute solos have enchanted audiences around the globe. He regularly tours internationally to the US, Japan, New Caledonia, India and New Zealand and has touched the lives of thousands of people with his music and his concern for his fellow human beings. Tenzin is the founder, organizer and creative force behind the Brisbane Festival of Tibet.  This annual festival celebrates Tibetan culture while raising awareness of the issues that threaten the future of Tibet and funds for Tibetans in exile.

The Workshop in Tibetan singing

Tenzin leads an innovative workshop in the Tibetan style of vocal projection and shares his knowledge of the technique and the stories told through songs of Tibet’s nomadic people. Participants learn simple Tibetan folk songs and investigate the ancient Tibetan art of “Lama Mani”. The Lama Mani tradition – the telling of Buddhist parables through song -dates back to the 12th Century. The songs were performed by wandering storytellers who travelled from village to village, drawing on their own often humble origins to relate to people from all backgrounds.

Vividly illustrated Buddhist thangka paintings depicted the narrative and helped the audience understand what was essentially a teaching. 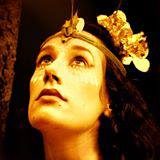 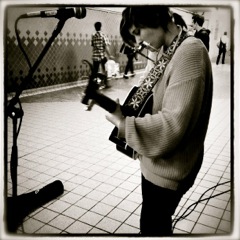 California born Mimi Gilbert, has had a passion for music since she could reach her grandmother’s piano keys.

Read more
Raised in a small town, she finally found her courage to perform music publicly when she discovered the art of busking. Now living in Sydney the past 3 years, she continues to busk and perform to people and places of all kinds. Creating layer upon layer of a raw, prevailing sound that simply burst with life, journey and experience, Mimi feels most herself when behind any instrument at all, sharing the understanding that comes from music with others. She has a deep love for life, travel and people of all kinds. Mimi’s dream is to use music, and whatever other abilities she has, to help people who are in need.
Sydney Web Design by Soul Necta